Holding my dog up against my
chest moments before he had peacefully taken his last few breaths this past
Saturday evening, I thought about how cold his hands and feet were; how
slow his heart beat and breathing were; and just how much he had shrunk and atrophied.  Of course, these are all
the consequences of aging, a topic that I try to avoid thinking about as all
get out because thinking about aging inevitably leads to an inner dialogue
about your own mortality, or the mortality of those close to you.
Lo and behold, there is a
great amount of money spent on all the things that could potentially delay the
aging process and the advent of the diseases associated with it – including,
but by far not limited to, hormone replacement therapy and massive vitamin
supplementation.  Unfortunately, this
desire to push back Father Time has spawned and perpetuated some pretty awful
ideas which have no basis in any reasonable level of evidence.

One such idea, actually a
few related ideas that I’ll roll into one idea here, is to limit the amount of
glucose our cells burn over the course of a lifetime, so as to turn on a primitive
stress response mechanism called autophagy, a process whereby cells degrade and
recycle their dysfunctional components in the face of nutrient depleted
conditions.  Unfortunately, this
necessarily entails burning proportionately more fatty acids for fuel (or
what’s called being “fat adapted” in horribly egregious articles filled
with wishful thinking like this one) and turning
down thyroid functioning, or the rate at which we live, adaptations that are directly
at odds with reaching our full potential as human beings.

Mainly, the physiological changes
which I am most interested in are the increased secretion of ACTH, insulin, and beta-endorphins
(anandamides and
2-araichdonylglycerol [derived from arachidonic acid]) and decreased
secretion and tissue responsiveness to the thyroid
hormones – all of which are disease-promoting in excess, while incidentally
predisposing to weight gain.  ACTH is a
subject that deserves its own post.
Ditto for the beta-endorphins.
The discussion herein will center on the thyroid hormone, especially
since I’m highly motivated at this moment to avoid all quibbling over insignificant
details and minutiae at all costs. 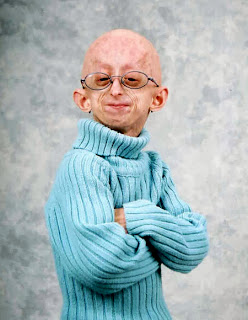 Maintaining tissue
responsiveness to hormones is, I believe, a key factor in slowing down the
aging process.  Consider Progeria, a syndrome famous for
producing an apparent accelerated aging in children.  Progeria is characterized by a massive
reduction in the responsiveness of cells to all hormones – a defect
thought to drive the degenerative conditions that appear in
children with the condition.
A cell’s responsiveness to
hormones is most sensitive when the stress hormones, free amino acids, and free
fatty acids in the blood are low. For example, a deficiency of growth hormone,
a stress hormone secreted by the pituitary gland, leads to an inflated
sensitivity to the hormone insulin in adulthood.1
Next, consider for a moment people
who diet often.  Despite having normal lab tests these people
will experience all the signs and symptoms of hypothyroidism.  This paradox indicates a reduced sensitivity
of tissues to the thyroid hormones, brought about by the stress of
under-eating.  In point of fact, the
uptake of thyroid hormones into the central nervous system is impaired by high
levels of the stress hormones, free amino acids, and free fatty acids.2 In the central nervous system, the thyroid hormones,
in conjunction with the sex hormones, are not only essential for brain
development, but also for brain growth, repair, and maintenance in adulthood.3
A low carbohydrate diet,
another self-imposed stressor, not only impairs the ability of cells to uptake
thyroid hormone, but also hampers the conversion of T4 (pro-hormone)
to T3 (active hormone) in the body or directs the conversion of T4
to reverse T3 (inactive hormone), rather than T3.  These conversion problems could alternatively
explain the pattern of having normal lab tests and hypothyroid signs and
symptoms.4 In the pituitary gland, for example, anything that
inhibits the production of T3 from T4 disinhibits the
release of TSH, resulting in the following pattern: ↑
TSH, ↑ T4, and ↓ T3.5
The thyroid hormones are the
principle regulators of all the things concerned with metabolism, including the
process of tissue repair and renewal.  Because
the thyroid hormone both facilitates the release of glucose from the liver and
stimulates the uptake and oxidation of glucose in the tissues outside the liver
(thereby working antagonistically and synergistically with insulin,
respectively) there’s really no surprise here.6 In fact, even topically applied active thyroid
hormone accelerates wound healing and repair following injury.7
But in so turning up the
metabolism by way of the thyroid and supplying nutrient replete conditions to
cells, are we not incidentally shutting off the mysterious and magical powers
of autophagy?
Another feature of Progeria,
which animal models of Progeria and the like have unexpectedly found, is an increase in autophagy – an effect touted
as highly desirable among Paleo, low-carbohydrate, and caloric restriction
advocates.  The molecular mechanisms are
not well understood, but it does help to explain, to me at least, why chronic
dieters look so haggard and the opposite of healthy, vibrant, and attractive;
sometimes, as if death has warmed over.  Simply put, autophagy is an adaptive
response to metabolic stress that when chronically activated drives premature
aging by inducing catabolic processes that outpace the renewal ability of
cells.8 An increased oxidization of fat in preference to
glucose is a key feature underlying this downward metabolic shift, as well as
an impairment of mitochondrial respiration and a decline in ATP levels.
As an aside, the fact that
Internet diet gurus had made a claim – which probably led to undue misery –
about their diets based on a study in a roundworm should piss you off.
The positive
association between resting metabolic rate and maximum lifespan may suggest two
things.  The first is that without having
to call upon the mysterious and magical powers of autophagy, a high resting
metabolic rate accelerates cell protection and repair mechanisms by way of
enhanced protein synthesis.  The second
is that the thyroid hormones are efficiently acting on their target tissues on
which they activate the uncoupling proteins, thereby diffusing the reductive
stress imposed on cells (by for instance a sluggish metabolism) to discourage
the formation of reactive oxygen species and oxidative stress.
Patented, synthetic thyroid hormone
products are on their way to the market pending approval by the FDA and, from
the outside looking in, they seem to be highly effective for all the conditions
for which a deficiency of thyroid hormone directly cause, from easy fat gain to
heart disease.  They also would eradicate
the uncertainties associated with glandular products and the cardiovascular
side effects associated with the synthetic products because thyroid hormones,
to be effective, only really require
identical big and bulky groups attached to each of their two tyrosine
amino acid residues to restrict movement around the bond which holds these two tyrosine
amino acid residues together via an ether linkage. (I wanted to blog about this
in the past but I was 99.97% sure it would interest no one.) 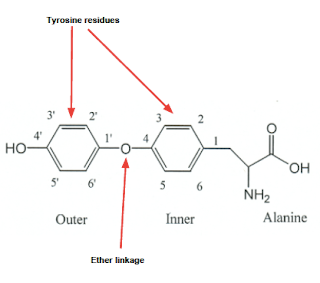 Whether we like it or not,
autophagy will occur in all of our cells.
It is a primitive form of protection that allows cells to dispose of misfolded
proteins, misassembled protein complexes, damaged mitochondria, and so
forth.  There is absolutely no need or
reason to force it to occur artificially with special diets – especially so if
you’re already healthy.  Undue misery is sure to follow from this
self-imposed deprivation.  Interestingly,
all the conditions that bring about autophagy are at odds with the conditions
that maximize our potential as organisms, and this entails the thyroid hormone
and oxidation of glucose for fuel.  I
think it’s time for us to toss the idea of diet-induced autophagy into
the pile
with the other worthless dogmas that have done little more than leave
the landscape of diet and nutrition understanding in disarray.